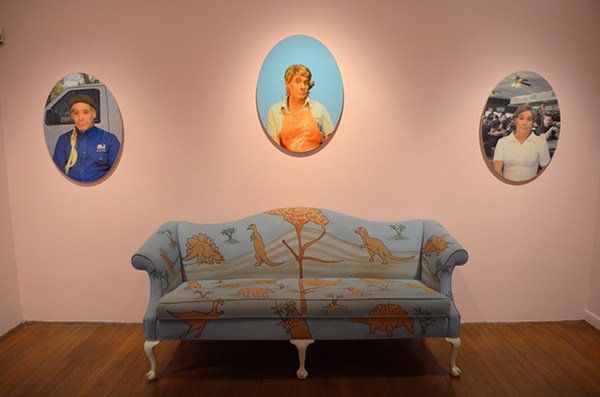 Exhibition: In Service | Out of Service
Relational Room

As an exploration in empathy and compassion building, artist David Rohn will perform one of his many cast of characters for In Service | Out Of Service. By claiming that he is currently on duty, Rohn questions the role of labor in art and which services are rendered unseen. He demonstrates that no one role should be taken for granted in a social situation as he activates the Art and Culture Center with warmth and kindness. Rohn chooses to be an active participant and weave together narratives at every stage in the exhibition process. His role as performer is one of honoring those who are currently in service as well as those who’ve been dismissed and marginalized. His subjects include a car mechanic, Home Depot store clerk, a hotel housekeeper, security guard, hospital attendant, waitress, cable installer, among others.

From the absurdly transformative to the serious, Moist Things is a survey of Charley Friedman’s 22-year interdisciplinary practice. Greeted by the wind current of 80-spinning beach balls, viewers can’t help but feel awe for the elevation of everyday objects in “Science Project.” Friedman animates the giant grocery store beach ball bins from our childhood, giving them a simultaneous individual and collective presence as rotating planets in a surreal solar system. “Carpet World” renders the earth as a domesticated object, which feels like a stop on the path in a continuous orbit to “I Like Moist Things,” a ridiculous aphorism spelled out in sponges that ironically produces meditative sounds as the dripping water cycles back into a custom-made kiddie pool to produce a fountain. Friedman takes license to transform how we view everyday objects, including “Garden” made entirely of resin-coated eggs and yolk.

Based in Lincoln, Nebraska and Brooklyn, NY, Charley Friedman received his MFA from The School of the Museum of Fine Arts/Tufts University, Boston and his BFA from Macalester College, St. Paul. He has won numerous awards including a Pollock-Krasner grant, Smack Mellon Hot Picks award, and has been a two-time Rema Hort Mann Foundation nominee. Friedman has exhibited and performed at numerous galleries and institutions including PS1/MoMA, Queens Museum, Gallery Diet, The Fabric Workshop, Volta NYC, Joslyn Museum, Jack Tilton Gallery, Neues Kunstforum, and at OMI International Art Center. Residencies include The MacDowell Colony, Fountainhead, Cooper Union AIRSummer Studio, the Bemis Center for Contemporary Arts, and Skowhegan School of Painting and Sculpture. Selected publications include: The New York Times and the Wall Street Journal. He is in various collections including the Walker Art Center, Brooklyn Museum, New York Public Library, Stanford University, Sheldon Museum of Art, Duncan Collection, and the Goldman Collection. Friedman is co-director with his wife, the artist, Nancy Friedemann, of the exhibition space Fiendish Plots in Lincoln. Friedman is represented by Miami Gallerist Nina Johnson.

Charley Friedman: Moist Things is supported in part by a grant from Funding Arts Broward.